Breakfast foods are great, but vegan and dairy free options aren’t always available. Worry no more because we have a yummy solution! In Episode 11 of our Make It with Hamilton Beach series, host Miranda Malisani shows us her recipe for a crispy tofu and herb and garlic cashew cheese breakfast sandwich, using our Hamilton Beach Dual Breakfast Sandwich Maker. Try it today for a breakfast option that includes everyone!

Watch step-by-step as Miranda demonstrates how to make it with Hamilton Beach in your kitchen by watching the video and check out the recipe details below. 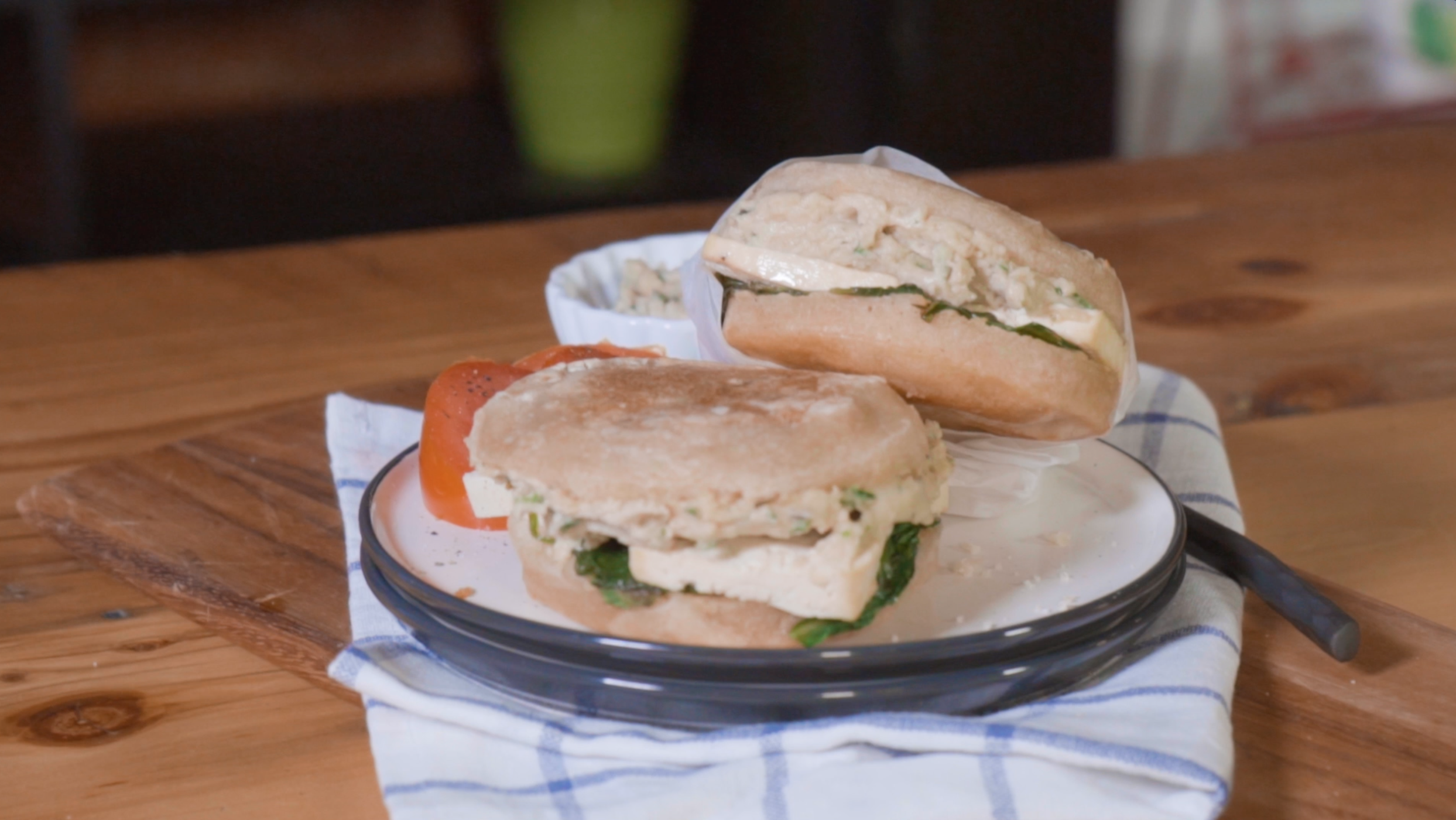 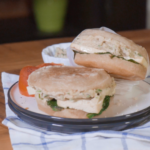 Miranda Malisani, RNCP is a Toronto based Nutritionist who is recognized nationally for her expertise in holistic nutrition. Her down-to-earth attitude and ability to cater her services to an individual’s needs has made her a leader in the field.

Happy Eggs Benedict Day! That’s right. Today is National Eggs Benedict Day. We couldn’t be more excited because, of all the brunch options out there, Eggs Benedict is easily one of our favorites. And with all this spring weather, who doesn’t want to enjoy brunch? So grab a mimosa and a seat on the patio. We have a delicious (and easy!) Eggs Benedict recipe coming to a breakfast near you. 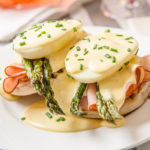 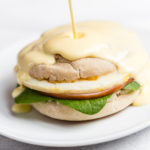 The way to a dad’s heart is usually through his stomach. But you can really impress pops by choosing a Father’s Day gift he’ll genuinely enjoy using. Dad taught you how to be an observant and thoughtful gift-giver, so choose one of these kitchen taskmasters to help him get his morning cup of coffee, afternoon sammy, or dinnertime steak in his belly easier than turning off the lights when you leave a room.

The FlexBrew 2-way coffee maker brews an entire 12-cup pot of coffee for the patriarch who guzzles down multiple mugs of the good stuff. But the real pop-pleaser is the single-cup side. Dad can choose between brewing with a K-Cup® or his favorite grounds for a cup to go. And if he’s a true coffee afficiona-dad, you could pair this gift with a coffee grinder and bag of his favourite whole bean coffee.

Get the FlexBrew now at Amazon.

Nothing makes a dad more annoyed than using unnecessary electricity. And in the summer – when he’s trying to keep the house cool – heating a large oven for his not-so-secret midnight snack of taquitos and pizza bagels is frustratingly inefficient. The EasyReach™ Toaster Oven is Amazon’s Choice , undoubtedly valued by dads who value even toasting and a small energy bill.

An indoor grill for rainy days

It’s in a dad’s DNA to want to grill meat. So much so, that they would rather be outside in a thunderstorm with a metal spatula standing over a flaming hot grill just for the sweet satisfaction of flipping a burger than microwaving a bowl of leftover soup. Don’t risk your father being struck by lighting. Buy him this indoor grill. Sure, it’s not as satisfying as cooking with actual fire, but it sure beats another bowl of reheated minestrone.

Everyone loves breakfast sandwiches, and your dad is no exception. If you think he’s waiting in that drive-thru line for a sandwich he could make himself, you’ve got another thing coming. He’s turning this car around right now and going home to make his own sandwich. It’ll be ready in under five minutes and it’ll taste better, too.

A high-performance blender for poolside smoothies

It might be time for dad to incorporate more fruits and veggies into his diet. Instead of telling him he needs to lose a few el-bees, show him how to easy it is to make healthy smoothies and whole juices with the Hamilton Beach Professional blender. His new physique will be the talk of the pool party this summer, and so will his socks-with-sandals fashion statement.

Get him one from  Amazon.

A panini press for the sandwich artist

Go out on the street and ask the first father you see if he fancies a hot sandwich. Of course he does. All dads do. Instead of taking him out for the reuben he’s craving, make him a sandwich (Poof! He’s a sandwich!) on the new panini press you got him for Father’s Day because you’re a smart kid who knows what kind of appliances your dad will actually use.

Your dad can make a pretty mean pulled-pork barbecue, but even the BBQ master himself can sometimes overcook and dry out meat, leaving everyone disappointed and hungry. (Hi, Hungry, I’m Dad.) No amount of the specialty barbecue sauces he’s been collecting since before you were born can save an overcooked pork shoulder. Make sure whichever large cut of meat pops is slow cooking stays fall-apart tender with a temperature probe enabled slow cooker. Everything from beer can chicken to Texas brisket will cook to whatever internal temp dad specifies. And when he’s not using the probe, he can use the slow cooker to make his famous chili (using the hot sauces he’s collected since before he started collecting barbecue sauces).

Get one for dad at Amazon.

While eggs Benedict is undoubtedly delicious, it can be a bit labor-intensive. If your kitchen isn’t equipped with the amazing Hamilton Beach® egg cooker, you might struggle to make the perfectly poached eggs. Hollandaise isn’t the easiest recipe in the book either.

We scaled back eggs Benedict into a breakfast sandwich, making it easier to approach and enjoy any morning of the week – not just for Sunday brunch.

First, preheat your Hamilton Beach® Breakfast Sandwich Maker. It’s claim to fame is putting a hot, homemade breakfast on the table in 5 minutes or less. We’re a little biased, but we have to admit, it’s pretty great. Whether you’re ditching the bread and making a cheesy omelette or pre-making bacon, egg and cheese sandwiches to freeze for the week, there’s no excuse for skipping breakfast when this marvel is in your kitchen.

Lower the cooking plate and add one egg. Then add the other english muffin half on top and lower the cover. Cook for 4-5 minutes.

It’s not eggs Benedict without hollandaise sauce so we whipped up a quick version we adapted for the Hamilton Beach® single serve blender.

Drizzle the hollandaise on top like you would with classic eggs Benedict and grab and fork and a knife. Or serve it on the sandwich (like you would any other condiment) to make it a little easier to eat with your hands. Introduce the kids to eggs Benedict with this simple sandwich version during the week or put them on the Mother’s Day brunch buffet alongside mimosas and coffee cake. 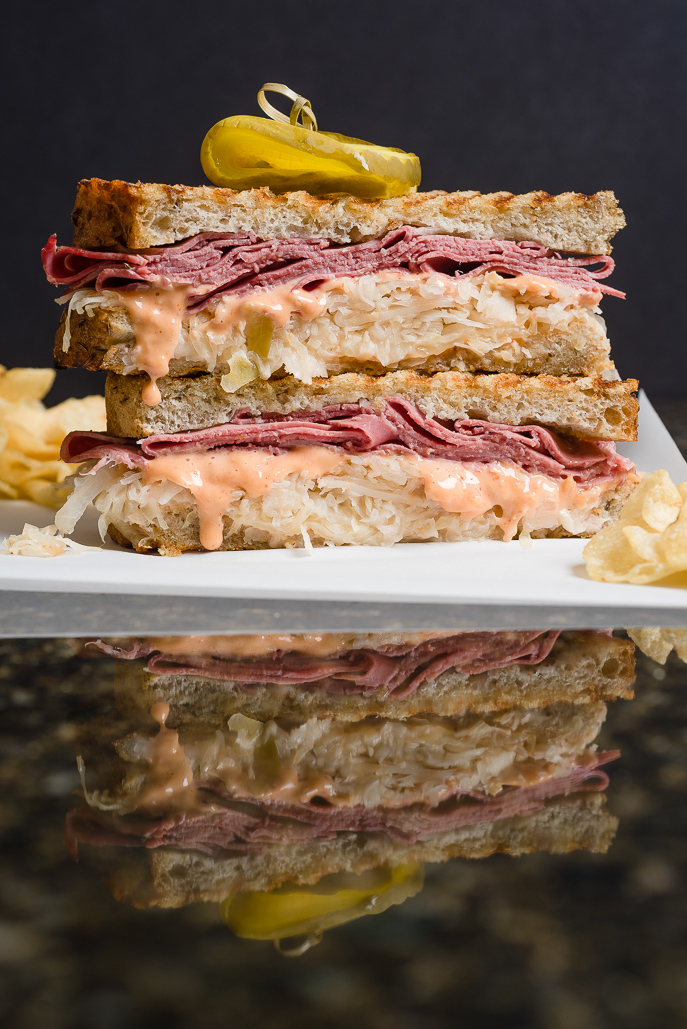 Reuben sandwiches are a New York deli classic and a great use for leftover St. Patrick’s Day corned beef. It’s no wonder this sandwich is counted among many people’s favorites. A great reuben with a side of chips and a soda is about as perfect a lunch combo as one can create. 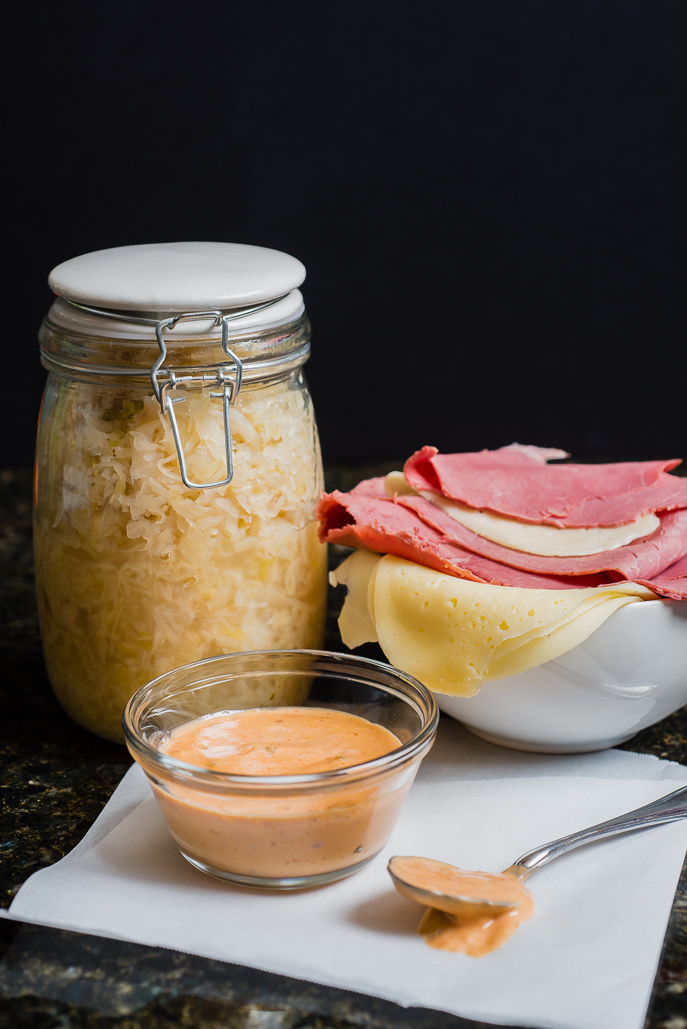 If you’ve never had a reuben sandwich before, we a) are very sad for you and b) think you should stop reading here and run to the nearest deli counter. Are you back? Okay, good, we’re all on the same page about how delicious the reuben is. The origin of the sandwich is unclear. One story credits a grocer in Omaha and one, a deli owner in New York city (I’ll let you guess which side of the fence we stand on). Wherever its true origins, we’re glad it exists because it’s a favorite in our test kitchen. 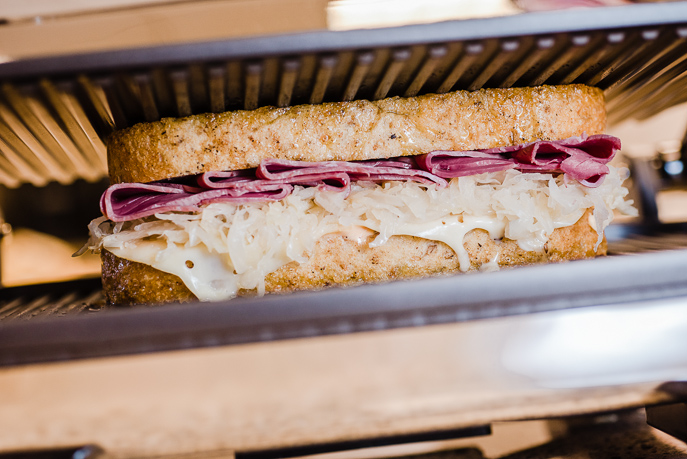 The grilled sandwich contains a stack of corned beef, sauerkraut, swiss cheese and Russian or Thousand Island dressing layered between slices of buttered rye bread. It’s typically grilled until everything is warm and melted, but we love the way the cheese melts and the bread gets toasty in our panini press. The panini press’s gorgeous grill marks add to the spectacle of gooey, dripping goodness.

You’ll love the panini twist on this New York classic – just don’t try to eat this delicious sandwich without some napkins nearby. 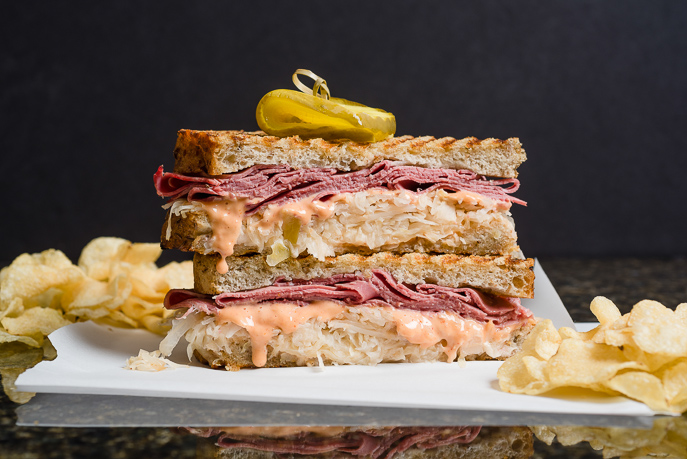 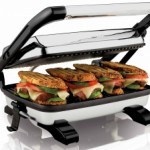 Pile bread up with your favorite meat, cheese and veggies, and create a satisfying meal in one easy press. The Hamilton Beach® Panini Press Gourmet Sandwich Maker Grill lets you grill hot, delicious sandwiches of any thickness, thanks to a floating lid that expertly presses down onto sandwiches and leaves appetizing grill marks behind. 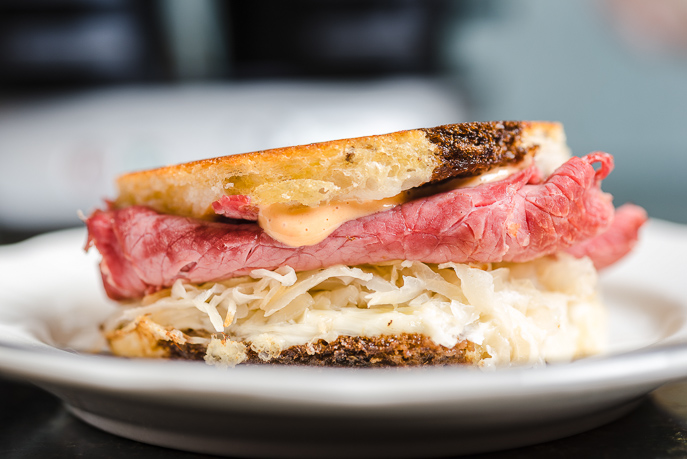 Since we obviously love reuben sandwiches so much, we knew we had to make one in the Breakfast Sandwich Maker. Happily, it worked like a charm! We love this recipe for a toasty reuben that’s perfect for party snacks, game days, small hands, mid-afternoon snacks or an easy lunch. And now we’re inspired to make reuben everything: nachos, tacos, dips, pizzas…we could go on. 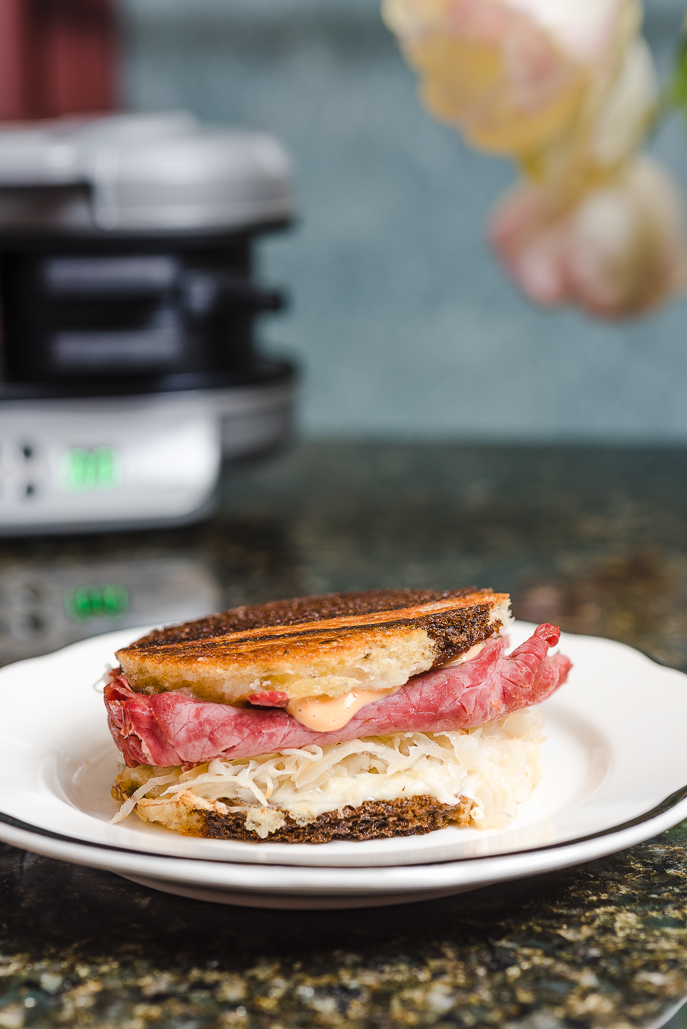 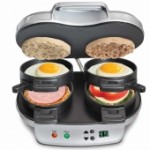 Don’t let another morning go by without the Breakfast Sandwich Maker by Hamilton Beach. It lets you enjoy a homemade breakfast sandwich, made your way, in the comfort of your own kitchen. Cleanup is easy because all removable parts go in the dishwasher.

Do you love reubens as much as we do? Have you tried to make them in a unique way like in a panini press or Breakfast Sandwich Maker?

What did you think?

Time for a spring refresh! 🌸🏠 Steam and de-w

Looking for the perfect side dish for your Sunday

Hankering for a thick, rich shake from the ice cre

You'll definitely want s'more of this thick and cr

Add a fresh salad with a zesty dressing to your lo

What better way to start your weekend than with a

Whip up a sweet treat to celebrate mom. Try our re

Planning a breakfast in bed spread for mom? Don't

This two-in-one blender and chopper does it all. F

Enjoy fried-favourites guilt-free without having t

#GIVEAWAY Give mom the gift of better baking! Ente

Not just for reheating food, did you know you can

Shake up your morning and try our lavender blackbe

Our Electric Glass Kettle not only boils water (an

And the Oscar goes to... Watching the Academy Aw